So while this blog will primarily focus on my travelling adventures and my many failings that arise despite years of experience, this specific post will be about the best things in my life, my dogs. So I am afraid for those of you with a fear or dislike of dogs, this is your queue to leave, don’t worry I won’t be offended. Though this post is specifically about dogs, I feel it is my duty to warn you that the puppies will probably be brought up in a fair few posts in the future.

Firstly there is my father’s dog. She is the oldest and wisest of my dogs, a 10-year-old Golden Retriever, born in India but who has Australian lineage (yes she is cooler than most humans, including me, could ever hope to be).  She is possibly the sassiest dog on this planet and is well aware that she is the queen of everything. This means that despite being bred to “retrieve” she does little of it because, once she has got the ball, it then belongs to her and she is under no obligation to bring it back to the peasant human who threw it for her. Despite her penchant for being sassy and superior around humans, she is surprisingly caring around puppies. Though she has never had her own, we have had three in her lifetime all of which she has patiently accepted while they attempt to chew her ears off. Oh and I almost forgot, her name is Baroda (named by my father after one of the royal families in India, and honestly it fits her perfectly).

Next is Basil, he is my creature. He is 4 and honestly the sweetest thing in the world. He is a black Lurcher with 4 little white socks (to keep his feet warm) and when he stands on his hind legs he is probably taller than me (though I admit that that is not that hard). He, unlike our actual retriever, is really good at retrieving and playing fetch. Though like Baroda he is not good at being his breed, lurchers are supposed to be expert hunters and honestly, I think if a bunny popped up in front of him and booped him on the nose he would be the one running away. Nevertheless, I love him dearly and he is a very good boy. 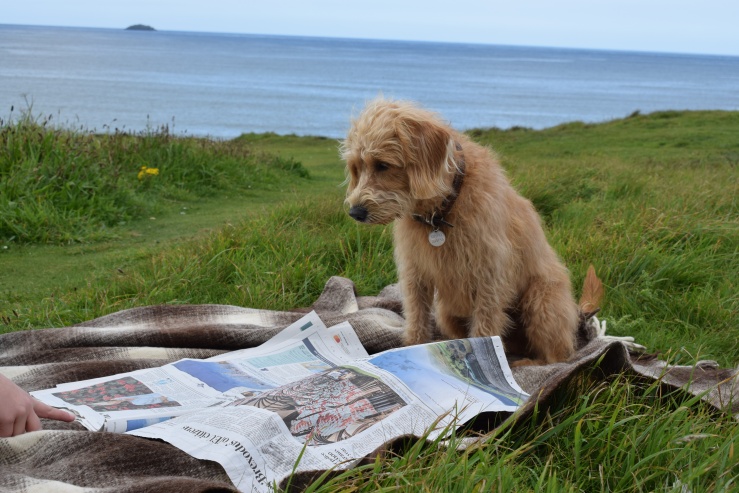 Last but not least is Bodkin our 2-Year-Old Miniature Labradoodle. He belongs to my mother and my sister and luckily has enough energy for both of them. He looks like a teddy bear and is about as cuddly as one. All he wants in his life is to be everyone’s best friend, humans and dogs alike, whether or not they want to be his. He has no skills in terms of hunting or fetch, but he is excellent at travelling on the Tube and the train as my mother has trained him to travel in London and Edinburgh, where she spends most of her time.

In the feline department, we have a beautiful 16-year-old tabby that my sister misguidedly named Honey Bun when she (my sister) was 9. She is a pretty awesome cat who slightly thinks she is a dog. She “barks” when I come home, but by barking I mean standing at my feet and meowing, full volume, at me. She also loves cuddles and being stroked and has never got angry or bitten or scratched anyone (that I know of). Basically, she is an excellent cat (or dog in disguise).

Anyway, those are all my animals. I thought I should just introduce them to you all as you will probably be hearing lots more about them in the coming blog posts. Please enjoy them and their loveliness!